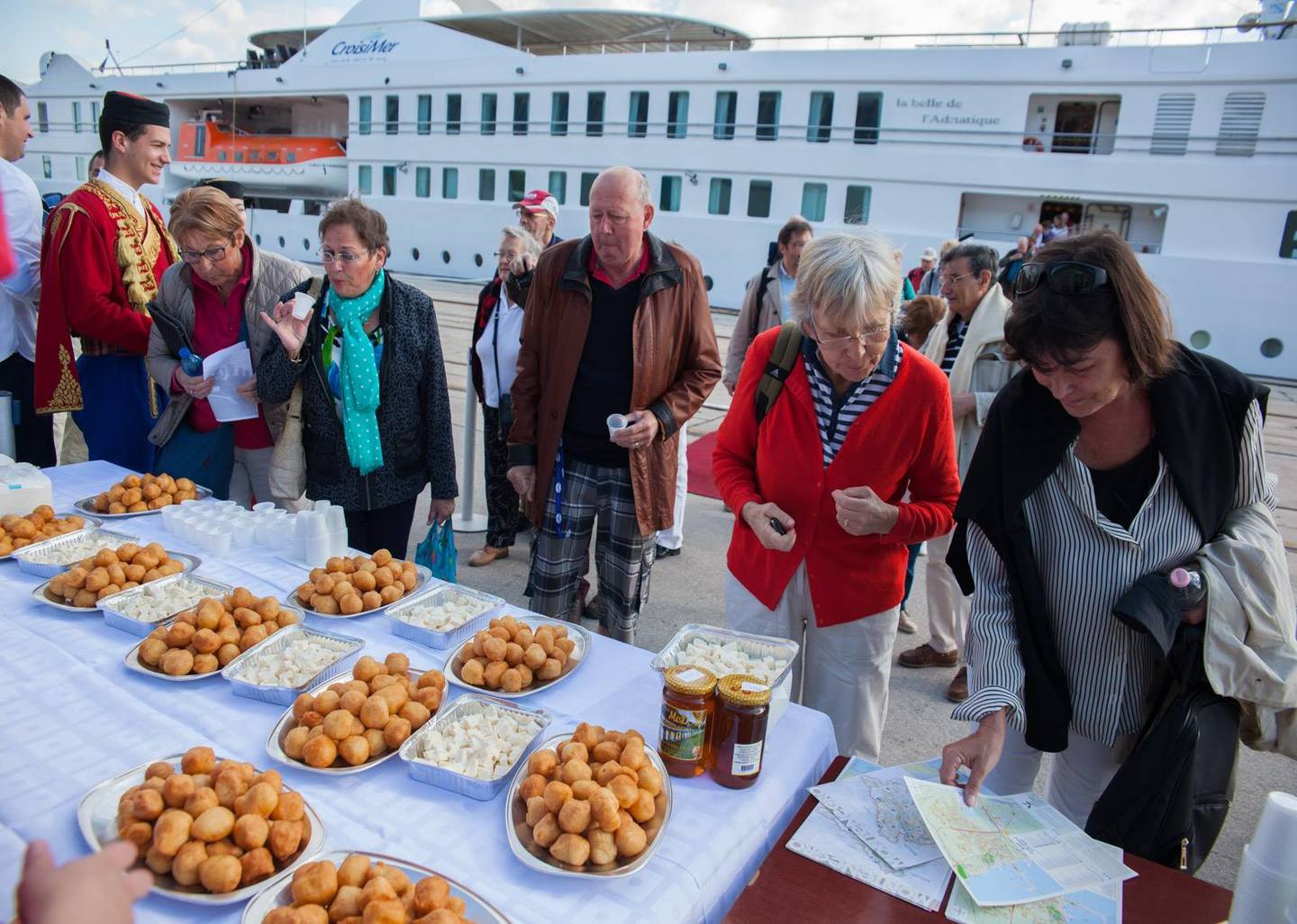 French mini cruiser "La Belle de l'Adriatique", belonging to shipping company "CROISIMER 'sailed in Bar on 18th April. With the arrival of this ship and the plaques exchange, the second cruise season was officially opened in Bar.
In cooperation with the Tourist Organization Bar, cruise ship tourists were welcomed by members of folk group “Jedinstvo” and pupils of the Economic and Catering High school, dressed in national costumes, offering traditional Montenegrin dishes: Montenegrin brandy, fritters, honey and wine. Municipality of Bar, company Port of Adria and agency Barska plovidba representatives attended the event.
Mayor of Bar Mr.Zoran Srzentic said that this represents a continuation of cooperation from last year, when over 8,000 passengers arrived in Bar through cruise lines. "Bar is a safe port and it has to offer a lot of things, both in the Old Town and in the newer part, as well as visiting the Old Olive and Skadar Lake," Srzentic said. He added that he sees the opportunity to develop cruise tourism in the fact that the nearest ports - Kotor, Dubrovnik and Venice are already overcrowded, and that alternative ports are being sought.
The opportunity to develop cruising tourism is also seen by the General Manager of the company, Sedat Kara, who announced that, according to the current reservations, nine cruise ships will arrive through this company in Bar this year, with more than 10,000 passengers. “We as Bar Cruise Port are ready to develop cruise turism in Bar with the support of Global Ports Holding , the majority shareholder of BCP. We are working to build up our port in terms of international standards on safety, security and operational perspective.
I would like to underline that cruise business is not PoA main business, It is not even 1% of our business. We invested over 11 M€ to handle Container and General Cargo. We will continue investing. I see cruise business as a flower which brings colour to our main business. There are many ports around the world doing cargo and cruise business together such as Port of Koper in Adriatic Sea. “
During this period, company hosted representatives of Spanish company Pullmantur Cruises, a part of Royal Caribbean Cruises, the second largest cruise corporation in the world, with about 25 percent of share in this market. In order to present Bar and Montenegro, company organized two-day tour of local sights and tourist destinations such as: Skadar Lake, Monastery Reževići, Sveti Stefan and Budva, Kotor, Old Town of Ulcinj and Ada Bojana for Pullmantur representatives.
The captain of the vessel that sailed in today, Nenad Mogić, said that on the cruising map, Bar was included as one of the destinations that can provide tourists with something different. "Cruisers are looking for new destinations, new names, places where we will not be together with huge mega cruisers, but have own port that is something new on the market," Mogić concluded.
Bar Cruise Port is part of the Global Ports Holding, the largest cruise operator, with a total of 14 ports in eight countries, among which there are some of the biggest cruise ports such as Barcelona and Venice. As majority owner of Company, GPH has put its network and experience at disposal to the Company, in order to promote Bar as a new cruise destination, and Montenegro as a tourist destination as well.